The History of Swimming Pools 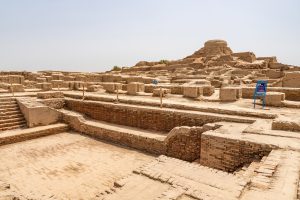 For many years, swimming pools have been viewed as luxuries in many cultures and countries around the world. In today’s era, pools have become commonplace in various corners of the globe. Virtually every country has swimming pools. Because the majority of the world has become so familiar with pools, no one stops to wonder when the first pools first appeared. Were they always a part of our culture, or did they only just make their appearance in human history?

Pools have existed for quite some time. While they weren’t always used the way they are now, they have been a part of how we socialize with one another. Whether they were used for sport, bathing, or religious ceremonies, swimming pools have been an intrinsic part of human culture.

As a premier North Texas pool builder, Mid City Custom Pools would like to explore the history of swimming pools and their uses throughout human history, covering the first appearance of pools to modern pools.

There are countless natural swimming holes throughout the world. They have served the same purpose as swimming pools, but they are natural. It wouldn’t be a reach, however, to assume that these natural pools inspired the creation of the man-made swimming pools we know and love today.

Many believe that the first man-made swimming pool dates back to 2,600 B.C.E. The Great Bath of Mohenjo-Daro is widely considered to be the earliest public water tank in ancient history. The bath found in Sindh, Pakistan, measures 39 feet long by 23 feet wide with a depth of around 8 feet. It has two staircases on each end that lead into the pool. The builders of this pool were experts at their craft. They were able to ensure the bath was water-tight by securely fitting bricks together with gypsum plaster. The walls were also similarly built. A layer of natural tar was laid on the sides of the tank and possibly underneath the pool floor.

Most experts believe that the Great Bath was used for special religious ceremonies, using the water to cleanse and purify those coming in and out of its water.

Pools continued to grow in popularity as time passed by. The Romans and Greeks began to view pools as luxuries. During their peaks, the way people lived their lives drastically changed. The quality of life improved greatly, leading to an increase in individual wealth. Pools began to be viewed as luxuries within these cultures.

During this time, pools were used for aesthetic purposes, adding a level of elegance and beauty to traditional architecture, much like they do today. However, they were also used for bathing, socializing, exercising, religious ceremonies, and much more.

Between the 6th and 8th century B.C., the ancient Greeks had areas known as “palaestras.” These were essentially athletic establishments where individuals would come to train. People would come to wrestle, play ball sports, box, and more. The Romans would eventually adopt palaestras themselves.

The Greek philosopher Plato believed that young children needed to learn to swim as a part of their core curriculum, alongside mathematics, writing, astronomy, and other courses.

The Romans took swimming pools and innovated them even further. They created the first swimming pools separate from bathing pools. Additionally, the Roman lord, Gaius Maecenas, was credited with designing and commissioning the first heated pool. Following his creation, heated pools then became a staple within the Roman Empire.

At their peak, the Romans were able to create a massive 900,000 square foot pool in 305 A.D. They used this pool for bathing, swimming, socializing, and much more. Giant fires beneath its surface were used to warm the water. Conduits in the columns and walls were able to distribute heat throughout the pool’s water.

While swimming pools were very popular during the Greek and Roman empires, it took quite some time for the rest of the world to catch on. Swimming pools didn’t become popular again until around the mid 19th century. At this time, Britain’s National Swimming Society introduced the first competitive swimming pools in the early 1800s.

There were plenty of indoor competition pools throughout London, and the National Swimming Society of England took advantage of this surplus. They established many swimming competitions throughout the country. The events gained so much popularity that it led to the formation of the Amateur Swimming Association in 1880.

Across the Atlantic Ocean, the first U.S. swimming pool was opened in Boston in 1868. It was established in a poor neighborhood where the residents couldn’t afford pools or baths.

In 1896, the first modern Olympic Games were held, which happened to include swimming races as one of the events. The inclusion of swimming as an Olympic event only increased the popularity of these amenities.

At the end of World War II, the popularity of swimming pools skyrocketed. They became status symbols. With the emergence of the middle class and their glamorization in Hollywood movies, pools became must-have consumer purchases.

With the increase in demand for swimming pools following World War II, pool builders needed to find a faster way to create pools, which brings us to gunite. Gunite was invented in the early 1900s. This material allowed builders to install pools much faster and for less money. It also allowed them to become more creative in their pool designs.

The technology used in creating pools continued to improve in the 20th century. Pools began to use chlorination and filtration systems to ensure that the water in the pool was clean and safe to swim in. Before, you had to completely drain the water from the pool and replace it.

Swimming pools have become an intrinsic part of American and human culture. They can be found in every corner of the world, no matter how big a country may be. With the advancements in materials, pools are far more complex and customizable than ever before. If you are interested in creating your own backyard oasis, contact Mid City Custom Pools today.