Pool Games for Your Pool Party this Summer 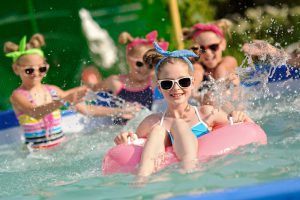 Summer is finally here… which means school’s out and it’s time, once again, for barbeques, camping, swimming, and pool parties. Not that we don’t love getting to spend more time with our kids during the summer, but with all that free time, one of the greatest relief for parents can be a swimming pool, as it gives the kids something to do almost every day. Kids are usually pretty great at using their imaginations to come up with fun pool games, but if they are tired of the typical Marco Polo routine, maybe it’s the perfect time for you to read up on some of the exciting games we’re going to tell you about in this blog post.

[if you’re feeling adventurous, adults can play too]

Fill in the blank with your kid’s favorite sea creature. Whether it’s dolphins, sharks, mermaids or even submarines, you can customize the name of the game and make it your own. The winner of the game, is the one that can swim the longest back and forth while holding their breath under the water.

Like a classic game of used-wrapping-paper-tube sword fights… this one is just played with your pool noodles instead.

In this fun and scary pool game, someone is chosen as the shark. It plays out sort of like tag, as the shark has to swim and tag other players making them ‘it’. The twist is that the players can get in and out of the pool, but they can only be out of the pool for up to 5-8 seconds [depending on your preference] at a time.

Good ol’ chicken fight. Not the most fun for the person underneath, but still a good time. If you don’t already know this game, it’s where two people sit on the shoulders of two others (in the pool of course) as they proceed to try and knock the other shoulder-sitter off. Obvious rules apply, such as no hitting or punching…

In this game, you take a clear bottle and fill it up with pool water. Try and use a bottle with a white or clear cap, as the point of the game is for it to be difficult to see the bottle. Throw the bottle into the pool and set the kids free to dive in after it, that is, if they can find it.

This game is best played with a diving board or deep area in the pool that can be jumped into. One player starts the game but jumping off the board and doing a trick or a move… whether it be a cannon ball, a spin, a flip, or just clapping your hands, the next player then has to mimic that move and add a ‘twist’ [no pun intended]. For example, if someone did a spin on the first round, then the next player would do the spin, and then add something like raising their hands at the same time, and so on and so forth.

In this game, coins are thrown into the pool. There are two teams. One of the teams consists of the ‘sailors’, and the other team consists of the ‘pirates’. If you’re worried about the kids fighting over who gets to be a sailor or a pirate, just call them all one-or-the-other and add a color, number, etc., to the team name. An outsider, or selected ‘treasurer’, then throws the coins into the pool. The first team dives in and has 30 seconds to collect as many of the coins as they can. As soon as the time is up, they then have to go hide their “treasure” somewhere in the backyard… as the other team takes their turn diving for the coins. Once both teams have collected and hidden their treasures, each team sets out to find the opposing-team’s treasure; whichever team finds it first, wins both of the treasures.

This game is kind of like freezer-tag, but in the water. A player is chosen as captain, and the captain does the tagging. When players are tagged, they then have to freeze with their hands over their head. There is a twist though… if a player is fully submersed under the water, they cannot be tagged by the captain, but they can ‘un-freeze’ their iceberg friends who have been previously tagged.

Summer is all about fun, so hopefully after some of these pool-game ideas, you are excited to throw your first summer bash of the season and give them a try. Not only is a pool a great way to keep your kids busy this summer, but it is pretty much a necessity in the Texas summer heat. If you don’t yet have a pool of your own and are considering one, you might be in search of a swimming pool builder in Southlake. You’ve come to the right place. Here at Mid City Custom Pools, we are excited to help you experience the best summer yet with your new swimming pool. So please, contact us today, and let’s get the pool party started.